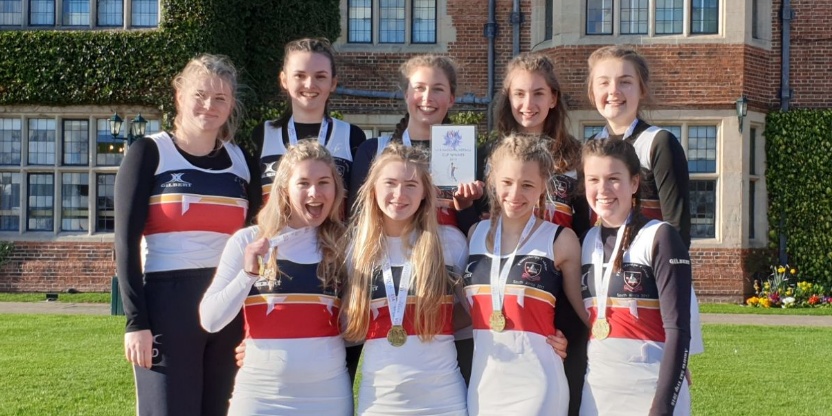 A sensational weekend of netball saw the College 1st VII Girls crowned champions at the prestigious Independent School Association’s National Netball Tournament, the U14 Girls placed second to take the silver medal and the U16 Girls finished fifth to take the Bowl.

The championships took place on Saturday 9 March at the excellent facilities of Queen Ethelburga’s Collegiate in York.  The day dawned wet and miserable making the courts slippy and treacherous, but Princethorpe’s girls were tenacious against the tough competition, the best young netball players from independent schools across the country.

The U18 Girls were undefeated in their initial round robin, winning convincingly against teams that included Leighton Park, Queen Ethelburga's, Stafford Grammar, Buckswood and Bedstone.  Their play offs proved thrilling, nail-biting affairs with the girls playing with commitment and composure and their vigilance and adaptability ensuring they claimed two excellent victories, a 6-11 win against Queen Ethelburga's and a 5-10 win versus Leighton Park.  Undefeated all day they finished top of the leader board and were crowned as champions overall.

PE Teacher, Hannah Carminati was delighted, commenting, “There were some very closely fought games particularly with Queen Ethelburga’s, but the girls only got better as the day went on and when they had to replay Leighton and Queen Ethelburga’s, in the play-offs, they just stormed ahead!”

The U14 Girls had just as good a day.  They won all their first round matches against Leighton Park, Queen Ethelburga’s and Ballard.  Their semi-final was against Claire’s Court, it was a close match but their hard work was rewarded with a 6-3 win.  Their final was against Alderley Edge, the girls battled through the first half but in the end their opponents proved just too dominant and they went down 4-6.  Their second place finish earned them the silver medal.

The U16s also played well. Tough conditions hindered shots at goal, but the squad pulled together and secured some good phases of play against strong teams and towards the latter stages of the competition, they pulled out some good results.  After the round robin they faced King Alfred’s in the play offs where a good win secured fifth place and the bowl.

Miss Carminati continued, “A super huge well done to all the squad.  It was a lovely weekend away and a very successful day with medals all round for the girls.  What a fantastic achievement.”